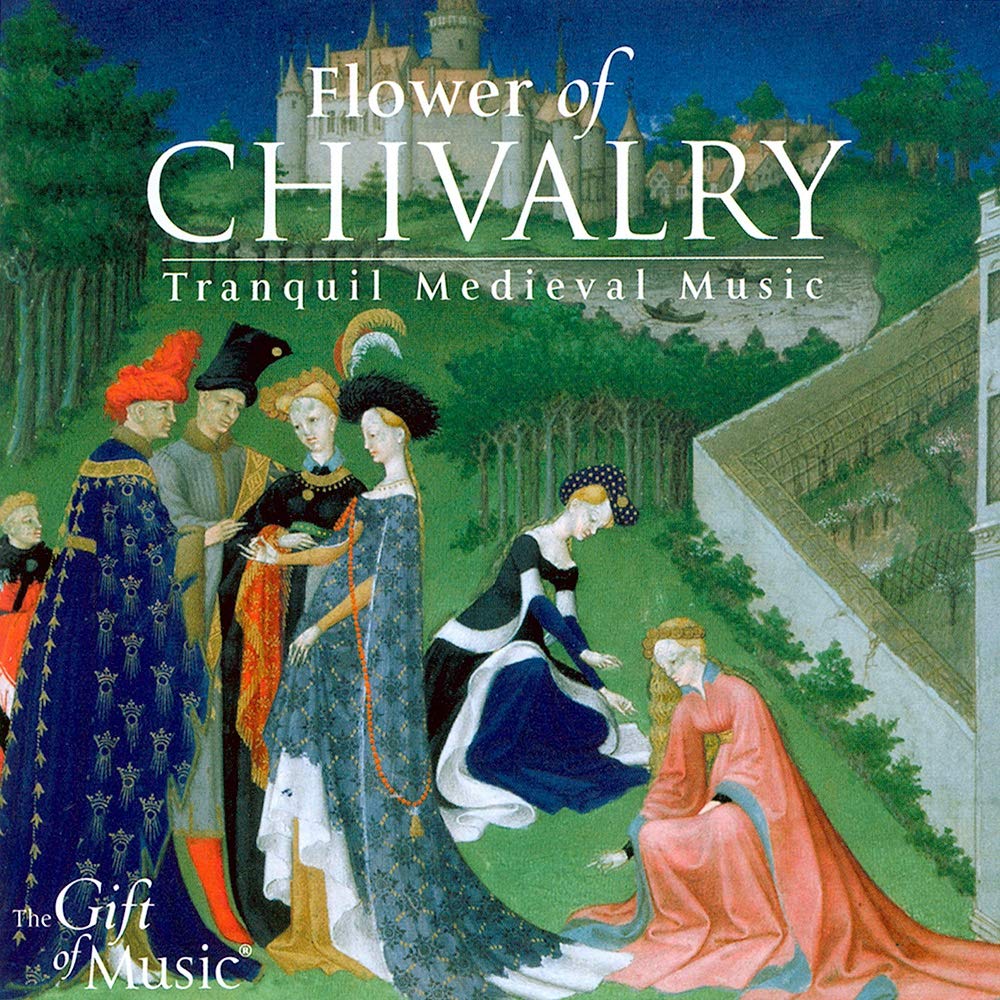 The Flower of Chivalry

There is an emphasis on peace and calm in this selection of medieval music. It includes gentle songs by one of the greatest composers of the age, Guillaume Dufay, whose music charmed the ears of the Burgundian court in the fifteenth century. Plus English harp music by King Henry VIII, and songs by Martin Codax from thirteenth century Spain.

The music on this album deals with universal themes in a timeless and subtle way. The programme interweaves instrumental music from the court of Henry VIII, much of it composed by the King himself, with songs of love and hope by the great medieval musician, Guillaume Dufay.

Henry VIII was an able musician, and a composer as well. A manuscript survives of music from his court which contains a surprising number of compositions, both instrumental and vocal, by the monarch. The consorts are particularly beautiful. Like much music of the period, these works can be performed in a variety of ways, as solo instrumental numbers, or as works for more than one performer. Here, they are each played by a single performer, but a variety of instruments can be heard.

Guillaume Dufay was probably born in or around Cambrai, in what is now Northern France, but he soon drifted South to Italy, where he studied at the university in Bologna, and became a priest. By 1428 he was singing in the papal choir in Rome, although he kept contact with the North, and worked in Savoy and Cambrai, which was under the jurisdiction of the Burgundian court. The songs by Dufay on this album are unaccompanied, composed for three or four voices, performed by the incomparable Hilliard Ensemble. These songs appear in an important manuscript held in the Bodleian Library, MS Canon.Misc.213. This very beautiful book was written out by hand, possibly by a musician from Saint Mark's, Venice, in the first half of the fifteenth century. It was 'discovered' amongst the Bodleian's collections as late as 1895 by Sir John Stainer, who made the first modern edition. Since his initial study, it has become one of the most discussed of all pre-Renaissance music manuscripts.

Martin Codax was a Spanish troubadour, and thus part of a long tradition of travelling court entertainers who could sing and play musical instruments. Codax is one of the earliest named composers and his songs of the sea and of longing for love are to be found in a manuscript. His music is poetic and intense, similar to that of Dufay. It is performed here with instrumental accompaniment from the hurdy-gurdy, one of the most traditional and popular of early instruments. The original songs have music only for the voice, and the arrangement is conjectural. In fact, the sixth song has no music in the original source at all, but music has been composed by Dr Simon Heighes for this recording, in the style of the songs around it.

Four solo instruments can be heard on the album: two harps, a clavichord and an organ. The latter two are keyboard instruments: modern copies of fifteenth and sixteenth century originals. The first harp is a modern instrument (played by Victoria Davies) and the second a copy of a medieval harp (played by Jon Banks). It is smaller and has fewer strings than its modern counterpart.

At SoundHound Inc., we're building a world where people can talk to the things around them as naturally as they would each other. Houndify, our independent voice AI platform, allows developers to build custom voice assistants for any product or service anywhere around the globe.
Talk to Us
Try it Free